Why can we sometimes see the moon in the daytime? 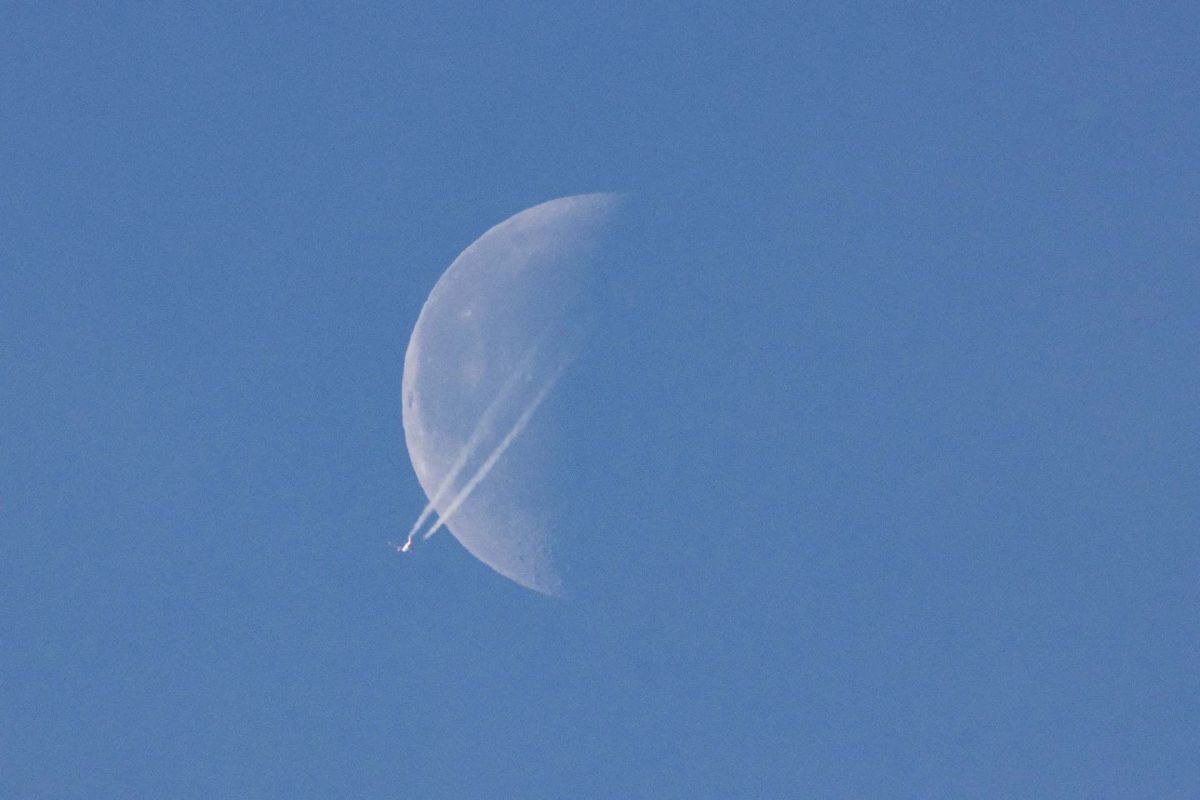 The moon’s presence in the night sky has transfixed people for millennia. But why is the moon sometimes visible during daylight?

We sometimes see the moon during the day for the same reason we see it at night — it is reflecting light from the sun — and its closeness to Earth makes it brighter than the daytime or nighttime sky. After the sun, the moon is by far the brightest celestial object we can see.

But the moon isn’t always visible during the day. This is due to Earth‘s atmosphere and the orbital cycle of our natural satellite. If our planet didn’t have an atmosphere, the moon would be visible from Earth all the time. Meanwhile, the phases of the moon mean that, when it moves between Earth and the sun — such as during the new moon — the illuminated side faces away from us and the dark side of the moon faces Earth, making it basically invisible to skywatchers on Earth.

The gas particles in our atmosphere — mainly nitrogen and oxygen — scatter light that has a short wavelength, such as blue and violet light. This scattering, which involves absorbing and re-emitting light in a different direction, gives Earth a blue sky.

In order to be visible during the daytime, the moon has to overcome the scattered light from the sun, Edward Guinan (opens in new tab), a professor of astronomy and astrophysics at Villanova University in Pennsylvania, told Live Science. For two or three days around the new moon, it is invisible to observers on Earth, as its position in the sky means that the sun’s scattered light outshines the moon. But, as is usually the case, the moon’s relative closeness to Earth (238,900 miles (opens in new tab) on average, or 384,400 kilometers) means that the light it reflects appears brighter to us than objects emitting or reflecting light which are farther away, such as stars or other planets.

Related: What is the ‘man in the moon,’ and how did it form?

According to Guinan, the stars that are visible from Earth are a million billion times less bright than the light from the sun, and millions of times fainter than that of the moon. The scattered light from the sun is so bright in our sky that it often overwhelms the starlight during the day, but not always the moon’s reflected light.

However, the moon’s visibility during daylight is also influenced by other factors, including the seasons, the current phase of the moon and how clear the sky is on a given day.

The moon is visible during daylight for an average of 25 days out of the month throughout the year. The other five days occur around the new moon phase and the full moon. Near the new moon phase, it is too close to the sun to be seen. When it is near the full moon, it is only visible at night, because the moon rises at sunset and sets at sunrise. “The only day that it isn’t in the sky with the sun for some time is the full moon,” Guinan said. “That day the sun sets and then the moon rises and the other way round, so that’s the only day where it’s not up there at the same time.”

The moon is above the horizon for 12 hours a day, but its appearance may not always coincide with daylight hours. In winter, when days are shorter at mid-latitudes for example, there is less time for the moon to be visible during the day.

According to Guinan, the best time to see the moon in daylight is during the first quarter (one week after the new moon) and third quarter (one week after the full moon). In the first quarter, during the afternoon, our natural satellite can be seen rising in the eastern sky. In the third quarter, it will be visible in the morning, setting in the western sky. These phases are the longest periods that the moon is visible with the sun in the sky, for an average of five to six hours a day, Guinan said.

Another phenomenon that affects when the moon is visible is earthshine. “During the crescent phase, when it’s close in angle to the sun, you can actually see the dark part of the moon, which you shouldn’t see because of illuminated light,” Guinan said. The dark part of the moon is “getting reflected light from the Earth.” The best time to observe this phenomenon is during the crescent phase, three or four days after the new moon.

For amateur moon-gazers, Guinan suggested websites that chart the lunar calendar, showing when the moon rises and sets.