This spider literally flips for its food 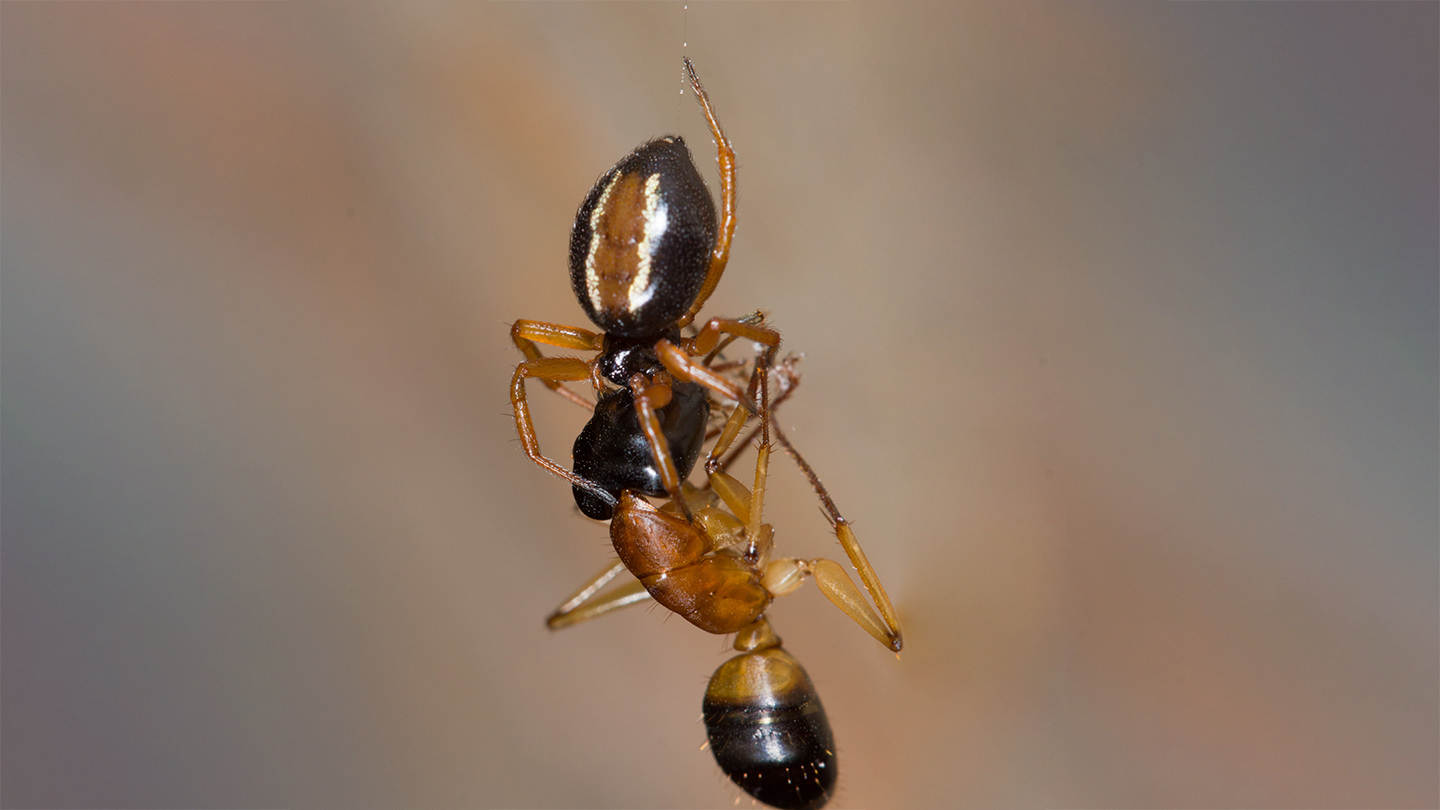 For one tiny Australian spider, somersaulting is the secret to taking on ants twice its size.

Ants — armed with powerful jaws and sometimes chemical weapons — are so dangerous to spiders that fewer than 1 percent of arachnids attempt to hunt the insects (SN: 9/8/21). High-speed footage now reveals that the Australian ant-slayer spider (Euryopis umbilicata) can tackle this risky prey by leaping over and lassoing its victims with silk.

The hunting maneuver hasn’t been found in any other spider species, researchers report September 19 in the Proceedings of the National Academy of Sciences.

“This acrobatic behavior is just fascinating. I’ve personally never seen this kind of hunting,” says Paula Cushing, an evolutionary biologist and curator of invertebrate zoology at the Denver Museum of Nature & Science, who was not involved in the study.

Alfonso Aceves-Aparicio, a behavioral ecologist at the Max Plank Institute for Chemical Ecology in Jena, Germany, stumbled across the somersaulting spiders while walking home one night. A graduate student at Macquarie University in Sydney at the time, Aceves-Aparicio was intrigued when he noticed dark dots darting across the pale bark of a eucalyptus tree.

The dots were tiny spiders moving among ants. Suddenly, one of the spiders jumped. “I thought it was trying to escape an ant,” Aceves-Aparicio recalls. “But then I saw the ant floating and I thought, woah, there’s something going on here.”

Most ant-hunting spiders use webs or sneak up on their prey from behind to minimize risk. But despite being smaller than their prey, Aceves-Aparicio’s spiders were facing banded sugar ants (Camponotus consobrinus) head on. Each spider positioned itself so that it could watch ants as they moved up the tree. As one approached, the spider flipped above its prey. Once in the air, the spider latched a thread of silk onto the ant.

This single tethering action — performed in the space of milliseconds — determined whether the hunt would succeed. If the tether stuck, the spider then darted around the ant, deftly encircling them with more silk and yanking them off their feet to be dragged off and consumed.

What stands out to Aceves-Aparicio and his colleagues was the technique’s effectiveness. Predators like lions and wolves tend to miss around 50 percent of their intended targets. The success rate of the 60 spider hunts that the researchers filmed was a staggering 85 percent.

To Aceves-Aparicio, the discovery shows that extraordinary behaviors can hide in plain sight. “The message here is to have a little curiosity and to pay attention,” he says. “There are things going on everywhere. We just have to be there to find them.”