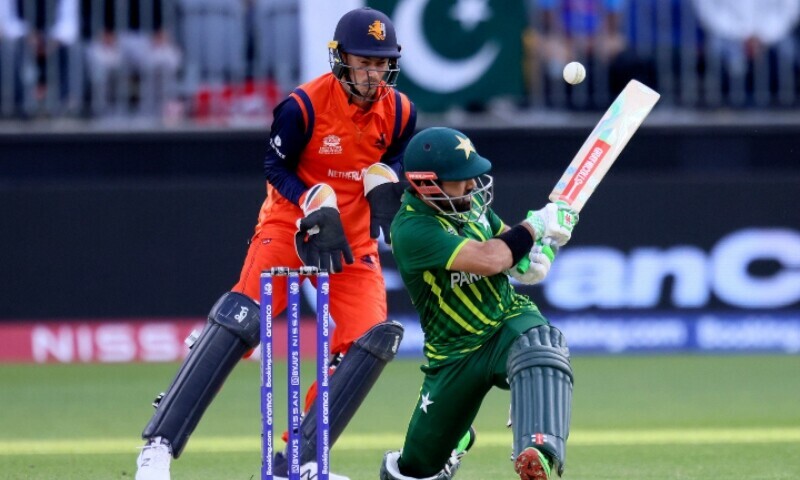 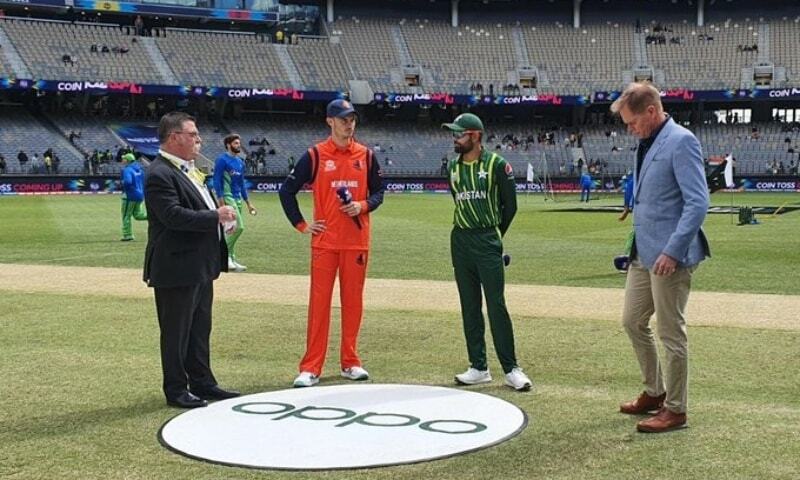 Pakistan’s bowlers, led by spinner Shadab Khan, helped them hammer the Netherlands by six wickets in Perth on Sunday for a first win at the Twenty20 World Cup which kept their faint hopes of reaching the semi-finals alive.

Pakistan restricted the Dutch to 91-9, and then cruised to 95-4 with 37 balls to spare as Mohammad Rizwan made 49.

But it was the bowlers set up victory for a side that lost their opener to India and then were shocked by Zimbabwe in Group 2.

Shadab returned figures of 3-22 and pace bowler Mohammad Wasim took two wickets to set the tone for their team’s domination against a Dutch side who are out of the semi-final running after losing a third straight Super 12 match.

“Very happy. Performed very well in the bowling and in the batting,” Pakistan captain Babar Azam said after the team’s first-ever T20 victory in Australia.

“In my opinion, we could chase better than this. But a win always gives you confidence. We’ll try to do our best in the next matches and win.”

Pakistan lost Azam, for four, in the second over of their chase when he was run out by a direct throw from Roelof van der Merwe.

But Rizwan attacked from the start, hitting five fours and putting on 37 with the returning Fakhar Zaman.

Fast bowler Brandon Glover had Zaman caught behind for 20 as a crowd of over 10,000, dominated by Pakistan supporters, feared for the worst at a venue where Pakistan fell short by one run in their chase of a modest 130 against Zimbabwe on Thursday.

But Rizwan and Shan Masood calmed the nerves with the stand of 30 and, despite both falling near the end, Pakistan sailed past their target as bowling hero Shadab hit the winning four.

Netherlands captain Scott Edwards won the toss and chose to bat first but Pakistan’s new-ball bowlers kept a disciplined line and only three runs came from the first two overs.

Returning opener Stephan Myburgh broke the shackles with a boundary off Shaheen Shah Afridi only to fall next ball, caught at fine leg attempting another big hit to be out for six.

There was no respite from the Pakistan quick bowlers.

Wasim took two wickets in two balls only for Paul van Meekeren to survive the hat-trick delivery, and Haris Rauf made good use of the bounce on offer.

A nasty bouncer from Rauf got through Bas de Leede’s helmet grill, forcing the batsman off the ground with a bruised cheekbone.

He returned from a medical check to sit out the rest of the match in the dugout sporting a nasty-looking black eye.

Shadab’s leg spin had Tom Cooper caught for one after the power play and then trapped Max O’ Dowd lbw for eight in his next over.

“I have bowled against few of their players in county cricket, so I know how they play,” said Shadab.

“All our bowlers bowled well. The fast bowlers put pressure on the powerplay, and I took wickets because of the pressure that built.”

After crawling to 34-3 after 10 overs, and with De Leede retired hurt, Netherlands captain Edwards and Colin Ackermann (27) attempted to rebuild with a 35-run stand but once they were separated the wickets kept tumbling.

Shadab trapped Ackermann lbw and Edwards fell soon after, for 15, to Naseem Shah.

Van Meekeren was last to go run out off the final ball for seven.

Pakistan need to win their remaining matches against South Africa on Thursday and Bangladesh in a week’s time and need other results to go their way to have any chance of securing a semi-final place.