There’s a lot to like despite a few quirks- Technology News, Firstpost OnePlus Nord, which started off as a budget smartphone series for the company, now has a third product category under the series. After a couple of Nord-branded TWS earphones earlier this year, the company has added a fitness watch to its portfolio. The OnePlus Nord Watch doesn’t promise the world but aims to do the key things right at an affordable price point. After having spent a couple of weeks with the watch, let’s see if it earns our recommendation.

The OnePlus Nord Watch design lacks a wow factor but it’s quite pleasant. The design is polished with a rectangular frame and no rough edges. A solitary physical button allows you to access different functions of this watch along with the touchscreen display. The display has curved edges that blend into the frame. The frame has a glossy finish, while the base of the watch has a matte finish. The watch comes in two shades – Midnight Black and Deep Blue, and they both look cool.

Either the black variant has a bluish frame or I somehow got a mix of the two variants with a dark blue frame and black straps. Either way, that combination looks good. The default silicon straps have a nice texture similar to the one you get on the OnePlus Watch, with a simple and standard locking mechanism with a stainless steel buckle and hoops. And yes, the straps are replaceable. 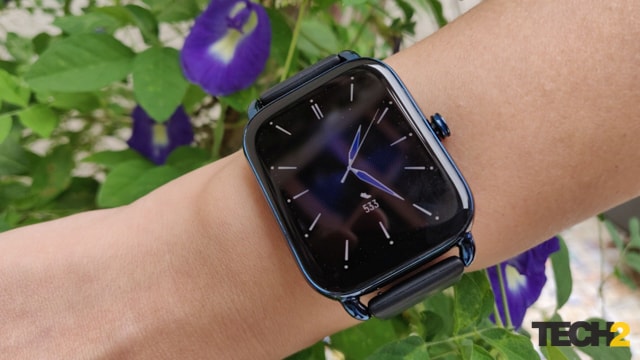 The watch weighs a little over 50 grams with the straps, which is a bit on the heavier side, but doesn’t feel that way once you wear it. Wearing it for long hours does not cause sweating or skin irritation. The build quality is quite solid and has IP68 dust and water resistance. While that makes the watch rain-proof and splash-proof, it is not enough to make it swim-proof. So it would be advisable to take it off before you dive into the pool.

Excellent AMOLED display but limited watch faces on the watch

The OnePlus Nord Watch has an excellent 1.78-inch AMOLED display with a resolution of 368×448 pixels, 500 nits brightness and 60Hz refresh rate. The images and text look extremely sharp on this screen thanks to the 326ppi pixel density, and the colours are vibrant. There is no mention of any scratch-resistant glass or anti-fingerprint coating for the screen, but I couldn’t spot any scuff marks on the screen even after 3 weeks of use. The smudge marks and fingerprints were also a lot lower than usual, and I didn’t have to wipe the screen frequently. 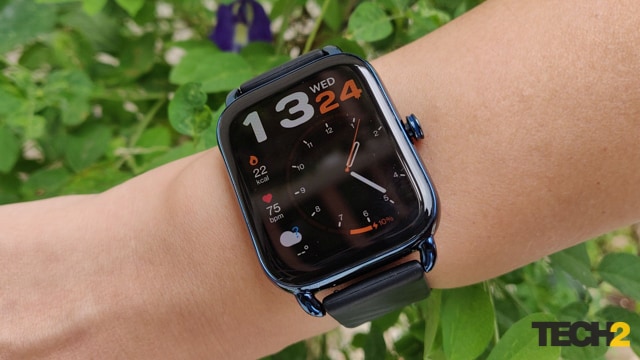 The screen has auto and manual brightness controls and is perfectly legible outdoors even under bright sunlight at a little over 75 per cent brightness. When indoors, even 50 per cent is good enough. One thing to note is you get a proper brightness control slider as you get on smartphones rather than the 5 predefined levels that you see on most budget fitness watches; this gives you more granular control. You need to flick your wrist or press the physical button to turn on the screen. Flick gesture works well most of the time, which can also be turned off during your sleep hours.

You get close to a hundred watch faces for the OnePlus Nord Watch in the companion app with a fair mix of digital, analogue, data-heavy and animated faces. The transfer process is fairly brisk, but you can store only four faces of your choice on the watch in addition to the default option that cannot be replaced. I did not see an option to manually remove or replace a particular watch face in the app, and it happens on a ‘first in first out’ basis on the watch.

OnePlus has opted for a new companion app for the Nord Watch. You need to download the N Health app and sync your device with it over Bluetooth (the watch is Bluetooth 5.2 compliant). The process is fairly smooth. While several settings of the device can be accessed from the watch itself, there are a few that are available only in the app. Things like fitness goals, reports and watch faces are available in the app in addition to a few more. The N Health app is fairly basic, but uncluttered and easy to understand, which is exactly what the target audience of the Nord Watch would prefer. It shows a synopsis of your daily/weekly/monthly activity, workouts and sleep patterns along with certain health parameters like heart rate and blood oxygen level. Tapping certain modules give you a further breakdown of that activity, but not an in-depth analysis. While the user interface of this watch is quite easy to grasp even for a novice, it also happens to be the most polished I have come across in watches under 5K.

I am not sure if Amazfit has anything to do with it at some level, but there are a lot of similarities, which is not a bad thing. The UI is smooth with lively colours, cool animations and transition effects. You can swipe down on the home screen for quick settings, swipe up for notifications and swipe left or right to browse through various widgets like daily activity progress, heart rate, sleep data and more. The physical button acts as a shortcut for all the watch functions from the home screen and doubles up as a back button on all other screens.

Generally reliable fitness tracking, but misses out on a couple of key features

Before we head to fitness tracking, let’s take a quick look at the other useful functions this watch offers. For starters, it does not support Bluetooth calling that you get these days on several watches, but you can silence or reject calls from the watch screen. You can choose to receive notifications and messages from most of the popular apps present on your phone. The messages are clearly legible on the watch screen, but you cannot reply back from there. 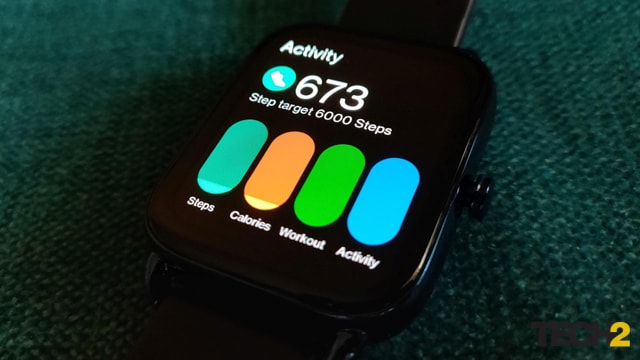 You also get music playback controls, a remote camera shutter, a calendar, a calculator and a handful of other utilities on the Nord Watch. As for sensors, you have a heart rate monitor, SpO2 sensor and a 3-axis accelerometer. If you wear the watch right and keep your hand steady, you get an accurate oxygen score (comparable to an over-the-counter oximeter) in less than 30 seconds. You also get one tap measurement for three health parameters in 75 seconds. It measures your heart rate, oxygen level and stress level in one go.

This watch can track 105 different activities and sports that include your usual walking, running, cycling, swimming, free training and their variations. It also claims to monitor popular sports like cricket, football, table tennis, badminton etc., along with a few dance forms. I did try walking, running and some strength training wearing this watch but not the rest. The Nord Watch lacks a built-in GPS module and as a result, the distance tracking is not all that accurate.

The number of steps recorded during an outdoor walk was still in the usual ballpark but the distance reported was a good 10-12 per cent lower than the actual. That’s a bit on the higher side with 5-7 per cent considered tolerable. Also, this watch reports a few false steps occasionally, especially when travelling in a train or car. So at times, it downplays your achievements and sometimes makes you believe that you have been more active than actual. 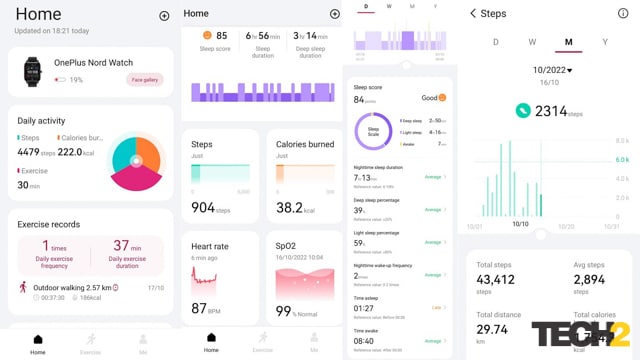 Sleep tracking works well here. The overall sleep duration from the time I fell asleep till I was up seemed correct. It tracks the quantum of light sleep, deep sleep and awake time, but no REM sleep. As a result, the deep sleep figure seems significantly higher than what other watches with REM tracking suggest. You get a sleep score in the app based on the quality and quantity of sleep. Stress monitoring is also available on this watch along with menstrual cycle tracking. You get some assisted breathing exercises as well as sedentary reminders with the coolest of animations I have come across in watches if you are stationary for long.

OnePlus claims a battery life of 10 days on a full charge for the Nord Watch with the following usage scenario – all-day wear, intelligent heart rate detection enabled, Do Not Disturb mode on during nighttime sleep, message notifications enabled (up to 150 messages), the screen waking up to 150 times per day, SpO2 monitored twice a day, and an average of 90 minutes of exercise per week. We believe that’s a conservative estimate. With double the weekly exercise duration, fewer notifications and wearing it to bed alternate nights during the testing period, it went on for a good two weeks, which is impressive. 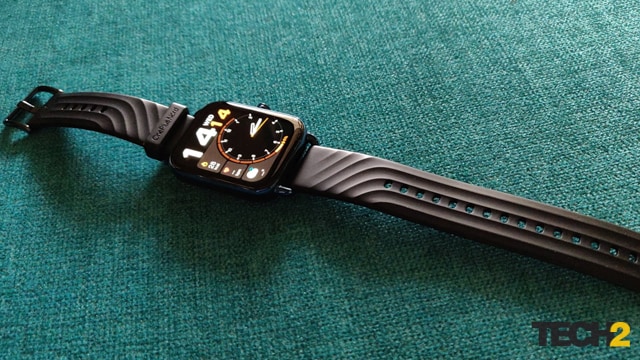 What’s even more impressive is the standby time, which the company pegs at 30 days. In reality, it only drops by 1 or 2 per cent if you don’t wear the watch at all for a full day. At that rate, it should go on for way more than a month. Of course, one wouldn’t buy this watch to cast it aside for that long like a new year’s fitness resolution, but it’s good to know that you don’t lose the reserves much on days you don’t use it. It takes about an hour and a half to charge its 230 mAh battery fully with the bundled magnetic pin charger.

The OnePlus Nord Watch sells for Rs 4,999 in India with a one-year warranty. While it may not be the most feature-rich watch in the segment, it does offer plenty of useful features and a lot of finesse to justify the price tag. At that price, you get a fairly stylish fitness watch with a sharp AMOLED display, simple and smooth UI, generally reliable fitness tracking (barring distance) and very good battery backup. It does miss out on features like built-in GPS, 5ATM water resistance and REM sleep tracking though.

As for competition, there are three options that the Nord Watch will go up against. I don’t think there’s any watch under Rs 5,000 that has all the features that this OnePlus product offers along with the ones it misses. The Realme Watch 3 Pro does come close with built-in GPS but its battery backup is drastically lower, and that isn’t swim-proof either. The Amazfit Bip 3 Pro offers most of the features, and for a few hundred Rupees less, but you will have to make do with a regular LCD screen instead of AMOLED.

If you increase your budget by a thousand bucks, you can get the newer version of the Amazfit GTS 2 Mini that does have an AMOLED display, though a little smaller, along with built-in GPS, 5ATM water resistance, comparable battery backup and a more detailed Zepp app. The design is a bit more elegant too. Thus spending the extra money would not be a bad idea at all. However, if you wish to stick to the 5K budget or prefer a bigger screen, the OnePlus Nord Watch is a solid option as long as GPS is not a requirement.