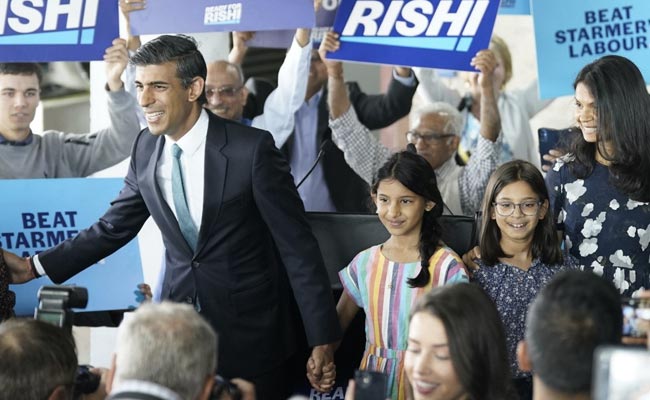 With Rishi Sunak as prime minister of the UK, it is now impossible to deny what has been evident for some while: Indian talent is revolutionizing the Western world far more than had been expected 10 or 15 years ago.

You might think UK leadership is an exception, but consider the US. It is entirely possible that there will be a presidential election in 2024 or 2028 between Kamala Harris (who is half Indian-origin) and Nikki Haley, who is of Indian origin. Few people consider that the most likely matchup, but it is very much within the realm of possibility.

If the two most prominent members of the Atlantic alliance end up being led by people of Indian origin, that is a testament to the flexibility and strength of the UK and US. It is hard to imagine the same thing happening in China or in most of the rest of the world. And one striking feature of Sunak is that his ethnic origin does not dominate the political discussion.

The success of Indian-origin talent is at this point overwhelming. Significant CEOs of Indian origin include Sundar Pichai of Alphabet, Satya Nadella of Microsoft, Parag Agrawal of Twitter (possibly not for much longer), Shantanu Narayen of Adobe, Arvind Krishna of IBM, Raj Subramaniam of FedEx, Sonia Syngal of the Gap, and (soon) Laxman Narasimhan of Starbucks. All this is happening in an America that is arguably the greatest generator of managerial talent the world has ever seen. These individuals are hardly succeeding in a weak or uncompetitive environment.

Furthermore, many of these people were born in India. Estimates vary, but India’s per capita income, according to the World Bank, still falls short of $7,000. You cannot credit India’s capital endowment for their success. It is their talent, even if many of them came from relatively wealthy families.

Of the different ethnic groups that have moved to the US, Indian-origin individuals have the highest per capita income. Ever.

Or consider my own profession, economics. Two of the three most influential academic economists of the last 20 years have been Raj Chetty, for his work on mobility, and Nobel laureate Abhijit Banerjee (with French-origin wife and co-author Esther Duflo, also a Nobel laureate) on economic development and randomized control trials. You can debate who else might belong in this top tier, but the Indian-origin presence is indisputable.

It’s not just about the Anglo world, either. Indian talent is spreading more broadly. In Germany, for instance, 58% of Indian-origin workers have either university degrees or specialist skills. That is about twice the rate of native Germans.

Working with Shruti Rajagopalan, I oversee a philanthropic program, Emergent Ventures India, to make grants to promising young (and sometimes older) people in India. I have met most of the winners, and they are remarkably ambitious and energetic.

I am of the view that India is by far the world’s most significant source of undiscovered and undervalued talent. It is akin to Germany and central Europe in the late 19th and early 20th centuries, and someday will be seen as such. It is possible to believe this and still have mixed or uncertain views about India’s future as a nation, just as central Europe in that time faced plenty of turmoil.

As tech entrepreneur and author Balaji Srinivasan has suggested, the internet will rapidly become much more of an Indian playground, influencing our ideas and moods as well as how we write and speak English. The future of our intellectual spaces is to a large extent going to be India-derived.

Imagine a visitor to Great Britain in 1900, then the world’s pre-eminent power, thinking about how to shape the future of their own nation. No matter what their area of concern, they probably should have been paying a lot of attention to the US. Now imagine a visitor to the US today, thinking about the future of their own nation: They really should be focusing on India.

The success of Indian-origin talent is about more than just the obviously high population of India. Blossomings of creative talent often have a mysterious element, but in this case some factors are evident; some proficiency in the English language, “good enough” internet connections, and an aspirational attitude that does not take prosperity for granted.

More subjectively, I would add that India has historically been skilled at absorbing and synthesizing foreign influences, including numerous conquerors. That may help make Indian talent especially good at adapting to very different foreign environments, including the UK and the US.

Tyler Cowen is a Bloomberg Opinion columnist. His books include “The Complacent Class: The Self-Defeating Quest for the American Dream.”

Disclaimer: These are the personal opinions of the author.

Share
Facebook
Twitter
Pinterest
WhatsApp
Previous article
Newly appointed ‘Chief Twit’ Elon Musk opens up about the real reason why he bought, but to advertisers- Technology News, Firstpost
Next article
Are Shaun White and Nina Dobrev Ready to Get Engaged? He Says…