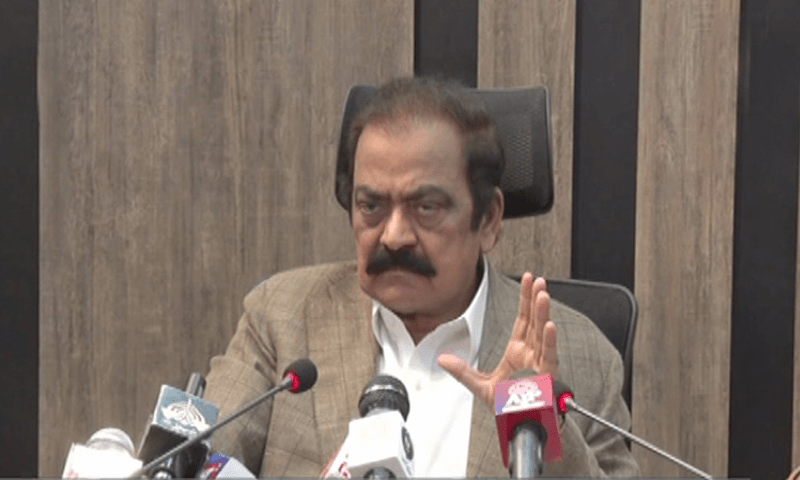 Interior Minister Rana Sanaullah on Saturday alleged that PTI Chairman Imran Khan wanted to create a law and order situation that might trigger clashes between the people and law enforcement agencies.

Addressing a press conference in Islamabad, Sanaullah alleged that the PTI’s long march was aimed at “shedding the blood of innocent people” in the federal capital.

The minister also released an audio clip, purportedly of former federal minister and PTI leader Ali Amin Gandapur, as evidence of his claim that the party was bringing arms to the capital.

Sanaullah accused Imran of planning to “spread chaos” in the name of the long march, citing the purported leaked audio.

In the clip, a man, believed to be Gandapur, is heard asking an unidentified person about the number of guns and individuals available. He also asks the other person to keep “things and people” ready at a location near the Islamabad border.

Sanaullah said that a forensic audit of the audio clip could be conducted to prove its authenticity and asked the Khyber Pakhtunkhwa chief secretary and police chief to take notice and “immediately” arrest the two people it featured.

Responding to the allegation, Gandapur referred to the events on May 25 and said the PTI was marching peacefully and yet the government clamped down on it.

“He has again threatened us that they will beat us … we have not worn bangles as well,” he said, questioning if Sanaullah had a “licence to kill”.

“If you beat us, what do you think, we will be carrying garlands for you?”

Meanwhile, Information Minister Marriyum Aurangzeb said the next general election would be held on its schedule despite the PTI’s “bullying, threats, abuses and intimidation attempts”.

Addressing a press conference in Islamabad, she said Imran should “do what he wants to do”, adding that the government would remain indifferent to his pressure-deploying tactics.

Commenting on a slew of audio recordings leaked in recent days, the minister remarked that they had “badly flopped” Imran’s conspiracy narrative related to his ouster.

“There was always an option of negotiations in politics, but talks are held with politicians, not with foreign-funded fitna, who is roaming on the streets,” she said on the topic of talks with the PTI.

“There will be no negotiations with those who want to achieve their political ambitions by causing deaths through a bloody march,” Aurangzeb made it clear.

Expressing concern over any possible untoward incident in Punjab, she said that Imran and the provincial government would be held responsible for any such instance.

Aurangzeb said the country would progress if every institution worked within its constitutional limits.

She said on the one hand the government was striving for the economy’s revival and its diplomatic relations with the rest of the world while on the other side, the “PTI chairman is busy promoting chaos and anarchy”.

The minister alleged that Imran was “pursuing his unfinished agenda of destabilising the country” at a time when the country was facing unprecedented economic challenges in the wake of historic floods.

Celebrations were made in India following Imran’s threats to national institutions, the minister added.