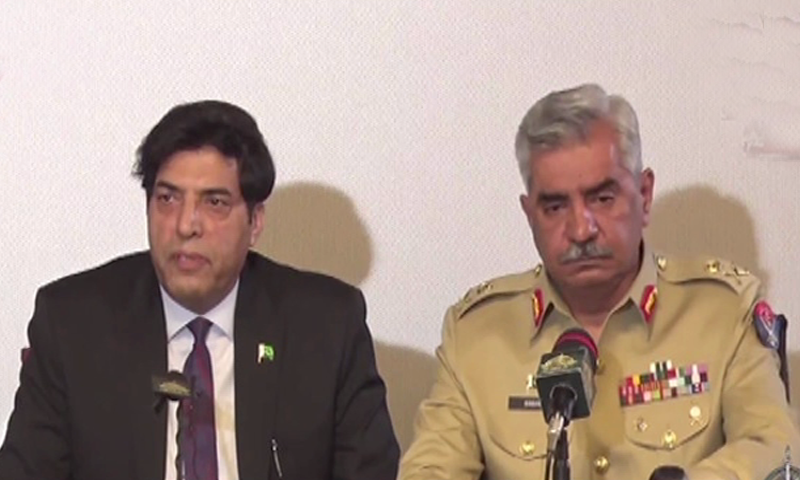 At the outset of the press conference, Gen Iftikhar said the purpose of today’s media talk was to shed light on the killing of journalist Arshad Sharif in Kenya and the circumstances surrounding it.

This press conference is being held in the context of presenting facts so that “facts, fiction and opinion can be differentiated”, he said, adding that Prime Minister Shehbaz Sharif had been “specially informed” about the sensitivity of the press conference.

Besides, it is necessary to determine the factors due to which a particular narrative is being built and people are being misled, he said.

“The chief of army staff was also targeted and faced criticism. An attempt was made to create a divide in society.”

He said that Sharif’s death was an “unfortunate incident” and called him an “icon of journalism in Pakistan”. He noted that members of the late journalist’s family had served in the army, adding that he always felt the pain of martyred officers.

Gen Iftikhar went on to say that Sharif’s popularity was based on being an investigative journalist and when the cypher — which PTI chief Imran Khan has touted as evidence of a foreign conspiracy to oust his government — surfaced, he conducted several programmes on the issue.

He held several meetings with the former premier and interviewed him, the DG ISPR said. “As a result, it was stated that he was shown meeting minutes and the cypher.”

The facts behind the cypher and Sharif’s death have to be determined, he said.

Talking about the cypher, Gen Iftikhar said that the army chief had discussed it with Imran on March 11 when the latter had termed it to be “not a big thing”.

“It was surprising for us when on March 27 a piece of paper was waved and an attempt was made to build a that was far from reality.”

“This is all part of the record. We wanted to bring this to the public. And we left the decision to the-then government.”

However, this did not happen and more rumours were spread to gain political mileage, he said, adding that the Pakistan Army was also targeted.

At this time, Sharif and other journalists were fed a particular narrative and an attempt was made to defame Pakistan and the country’s institutions across the world, he said.

“In this media trial, ARY News played the role of a spin doctor in targeting the army and promoting a false narrative […] the NSC meeting was presented in the wrong context.”

Gen Iftikhar stated that the army was expected to intervene in domestic politics. “The word neutral and apolitical was turned into an abuse. To all this baseless narrative, the army chief and the institution showed restraint and we tried our level best that politicians sit together to resolve their issues.”

He noted that Sharif made strong comments regarding the army during this time but added that “we did not have any negative sentiments about him and we don’t have such feelings now”.

During the press conference, the DG ISPR revealed that the Khyber Pakhtunkhwa government on August 5 issued a threat letter on the directives of Chief Minister Mahmood Khan which stated that a Tehreek-i-Taliban Pakistan (TTP) splinter group was looking to target Sharif.

“In this regard, no info was shared with the institutions who provided them the information.”

This shows the threat alert was issued with the aim to force Sharif to leave the country, Gen Iftikhar said. “There was reports that he (Sharif) did not want to leave the country but he kept being reminded that he was facing a threat” to his life, he said.

He went on to say that on August 8, Shahbaz Gill’s statement on ARY News regarding the country’s institutions was condemned and the politician was arrested a day later.

He said that when ARY News head Ammad Yousuf, who was arrested in August, it emerged that ARY CEO Salman Iqbal had asked the former to send Sharif abroad as soon as possible.

The DG ISPR stated that a manager in the ARY Group booked a ticket for Sharif for Dubai, according to which he was supposed to be back on September 9.

“On Aug 10, he left Peshawar airport thorough PK-637 for Dubai. He was provided complete protocol by the KP government,” he said, adding that the late journalist was escorted by KP officers to the airport.

“Arshad remained in the UAE until he had a valid visa. He left for Kenya when his visa for Dubai expired.”

He said that no one “forced” Sharif to leave Dubai at a government level and questioned who exactly forced him to leave. He also questioned who processed the journalist’s documents in the UAE, who looked after his accommodation, who forced him to not return to Pakistan and who assured him that he was safe in Kenya.

He also questioned who was in contact with Sharif from Pakistan and who was hosting him in Kenya.

“Kenyan police accepted their mistake and it has to be examined whether this is a case of mistaken identity or one of targeted killing. There are several questions that have to be answered,” he said, calling for a “transparent and fair probe”.

Therefore, the government has been requested to form a high-level inquiry commission, he said.