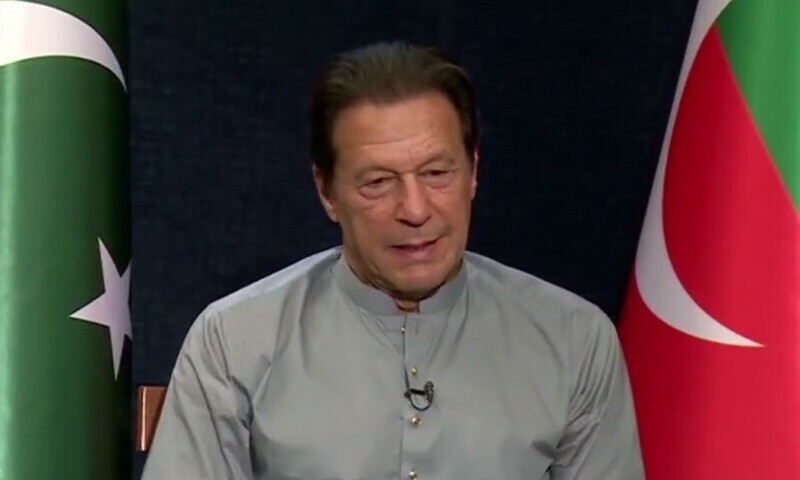 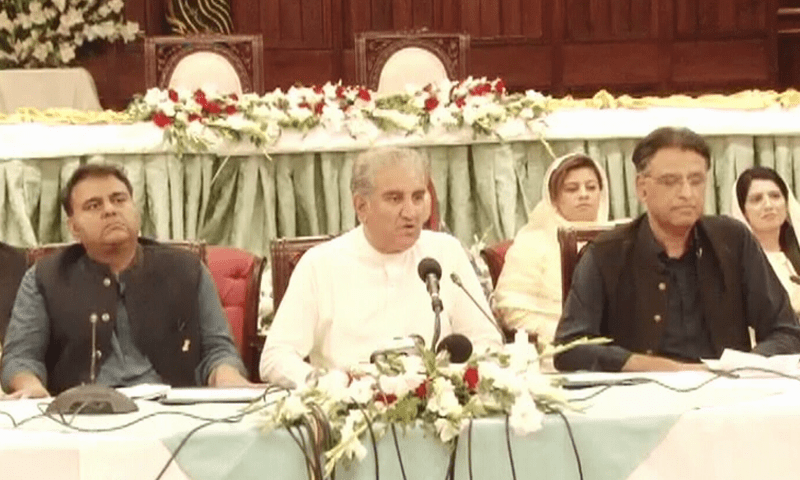 In an interview with journalist Amir Mateen aired on 92 News, the former premier said that today’s press conference was “unprecedented” and “never heard of”.

“Either there should be some issue that concerns them, like security, but they held a political press conference so I don’t understand this. Could the defence or interior minister or prime minister not have done this? What was their [the institutions’] job in holding the press conference?”

The PTI chief then went on to say that if he started giving answers “it will cause a lot of damage to the country”.

“Ever since I was removed from the government, I tried the best to prevent any harm to the country and army from my side. I know that if I say anything about the establishment it will impact the army.

“But when they do a press conference like this […] and if I start responding […] it will directly go on our army and I don’t want to hurt them in any way. This is why I always try that my criticism is constructive and beneficial,” Imran said.

Earlier in the day, PTI leader Asad Umar had said that his party chief never made any unconstitutional demands in “back door talks”.

“Imran Khan has discussed them in rallies and press conferences. The demands have been in front of the public since forever.”

Umar passed these comments in an apparent response to Lt Gen Anjum. In the press conference earlier today, the DG ISI — seemingly talking about Imran — had said that while citizens had the right to their opinion, why did “you praise him [the army chief] so much in the past if he was a traitor?”

“If you see him as a traitor, then why do you meet him through the back door? […] Don’t do this where you meet quietly at night through the back door and express your unconstitutional wishes but call [the army chief] a traitor in broad daylight. That’s a big contradiction between your words and your actions,” he had said.

Lt Gen Anjum also made the revelation that in March, Chief of Army Staff General Qamar Javed Bajwa was given a “lucrative offer” for an extension in his tenure. “It was made in front of me. He rejected it because he wanted the institution to move forward from a controversial role to a constitutional role.”

In the media talk in Lahore later in the day, Umar said that Imran owned both the army and the country. “But will Imran Khan agree with every decision taken by the army? Are there actions or decisions that he criticises? Absolutely. This is his constitutional right.”

You may not agree with the criticism but in Imran Khan’s point of view, these are all things that if followed, would lead to the betterment of the army and the country, he said.

Umar also clarified that Imran had never said anything that would weaken the army. “So these things said should be reviewed […] maybe there is a need for consideration.”

Meanwhile, in response to a question, he confirmed meetings on an extension for Gen Bajwa. However, he added that if such talks behind closed doors were brought out into the open then “who knows what talks [Imran Khan] will start bringing out.”

At the beginning of the media talk today, PTI leader Shah Mahmood Qureshi said that two press conferences were held in the last few hours and both had “further complicated matters”.

“We think a new Pandora’s box has been opened,” he said, pointing that a prominent thread in the press conference held by the military’s top brass today was that the institutions had decided to stay apolitical.

Talking about the press conference held by PTI leader Faisal Vawda yesterday, Qureshi said that all of PTI’s rallies in the past had been peaceful. “During our May 25 caravan, the government inflicted violence on us and we couldn’t even fully defend ourselves.

“Our policy is very clear that our march is peaceful and will be within the limits of the law and will respect the Constitutional needs,” the former minister asserted.

In a surprise media talk on Wednesday night, Vawda had alleged that blood would be shed and bodies would fall during the PTI long march — slated to commence from Lahore on Friday, October 28.

Countering Vawda’s claims today, Qureshi said that his presser was an attempt to spread fear among people. “Immediately after the announcement of the march, we received information that the people were enthusiastic and had started preparing for it.

“To lead them astray and create fear amongst them, this was a weak effort which failed,” Qureshi said, highlighting that live coverage was given to Vawda even by the state television.

He then called on people to participate in the long march, promising that it will be peaceful.

The PTI leader added that PTI had always respected institutions and defended them.

“To give the perception that we want to damage the sanctity of institution is contrary to reality. Imran Khan has had a stance and said again and again that a strong army is the need of Pakistan,” he said.

However, in an answer to a question from media persons, Qureshi said that if the military was apolitical, it “should not have held this press conference at all.”

‘If the cypher is untrue, why hasn’t it been probed?’

Separately, Fawad Chaudhry said that along with the respect of the institutions, it was also important to respect the people’s choices.

Since the day of the no-confidence vote, the people of Pakistan have shown, not once but twice, who they want as the leader of the country.

Chaudhry went on that military heads’ demand regarding an investigation in the cypher — which Imran has touted as evidence of a foreign conspiracy to oust his government — was fair, adding that PTI had been demanding a probe into it since the first day.

“The Supreme Court should tell us. The president wrote a letter for an investigation into the cypher. The question is that even if the cypher is untrue, why hasn’t it been probed?

“We want a powerful commission to be formed and the same should be done in the case of slain journalist Arshad Sharif,” Chaudhry added.

Meanwhile, former human rights minister Shireen Mazari said she was “very saddened” by the DG ISPR’s press conference and termed it as a totally “untruthful statement”.

She questioned how the DG ISPR had deduced that Sharif was under no threat, given that he was “brutally murdered” eventually.

Mazari said Sharif had told her that he was being targeted by assassins and there was a bounty on his head.

She said that Sharif was from a military family himself and had done many programmes in collaboration with the army. “What respect did you show [to him?] You got him martyred and whoever committed this brutal targeted murder are the same as those who threatened him and now our institutions are saying there was no threat,” she alleged.

Mazari added that a judicial commission should be formed to probe Sharif’s killing but also bemoaned that similar commissions in the past had either produced no results or their findings went missing.