Death toll from India bridge collapse rises to 132, search on for missing – World 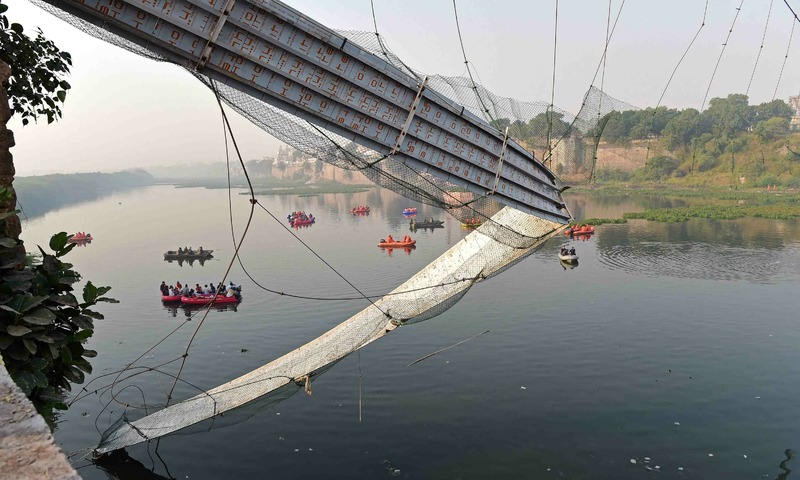 The death toll from a bridge collapse in Gujarat in India rose to 132, a local government official told Reuters on Monday.

A footbridge over the Machhu River in the town of Morbi was packed with sightseers enjoying holiday festivities when it collapsed on Sunday, plunging people into the river below.

“The death toll in the bridge collapse incident has gone up to 132. The search and rescue operations are continuing,” said the senior official, NK Muchhar, adding that the toll could rise further.

Armed forces personnel along with national disaster management and emergency teams from nearby districts were deployed to trace missing people and help with rescue operations, Muchhar said.

Authorities said more than 400 people were on and around the colonial-era suspension bridge at the time of the collapse. The bridge had drawn many sightseers celebrating the Diwali, or festival of lights, and Chhath Puja holidays.

A five-member team was appointed to conduct an investigation into the disaster.

“I saw the bridge collapse before my eyes,” one witness who worked all night trying to rescue people said, without giving his name.

“It was traumatic when a woman showed me a photo of her daughter and asked if I had rescued her. I could not tell her that her daughter had died.”

Another witness named Supran told local media that the bridge was “jam-packed”.

“The cables snapped and the bridge came down in a split second. People fell on each other and into the river,” he said.

Ranjanbhai Patel, another Morbi resident, told local media of the difficulties he and other faced in their bid to help people to shore.

“We pulled out people who were able to swim ashore. As most of the people had fallen into the river, we were not able to save them,” he said.

The suspension bridge, 233 metres long and 1.5 metres wide, was inaugurated in 1880 by the British colonial authorities and made with materials shipped from England, reports said.

Broadcaster NDTV reported that it reopened on Wednesday after seven months of repairs despite not having a safety certificate, and that video footage from Saturday showed it swaying wildly.

District police have launched an enquiry against the contractor, senior police official Ashok Kumar Yadav told AFP. The state has set up a five-member team to probe the tragedy.

Authorities quickly launched a rescue operation following the collapse, with boats and divers deployed to search for missing people.

Dozens of soldiers and sailors from the Indian Army and Navy were also called in for the rescue operation.

Indian Prime Minister Narendra Modi, who was touring his home state of Gujarat at the time, announced compensation for those killed and injured in the accident.

The Gujarat government on its website describes the bridge some 200 kilometres (120 miles) west of the state’s main city, Ahmedabad, as “an engineering marvel”.

Accidents from old and poorly maintained infrastructure including bridges are common in India.
In 2016 the collapse of a flyover onto a busy street in the eastern city of Kolkata killed at least 26 people.

In 2011 at least 32 people were killed when a bridge packed with festival crowds collapsed near the hill town of Darjeeling in India’s northeast.

Less than a week later, around 30 people were killed when a footbridge over a river in the northeastern state of Arunachal Pradesh collapsed.