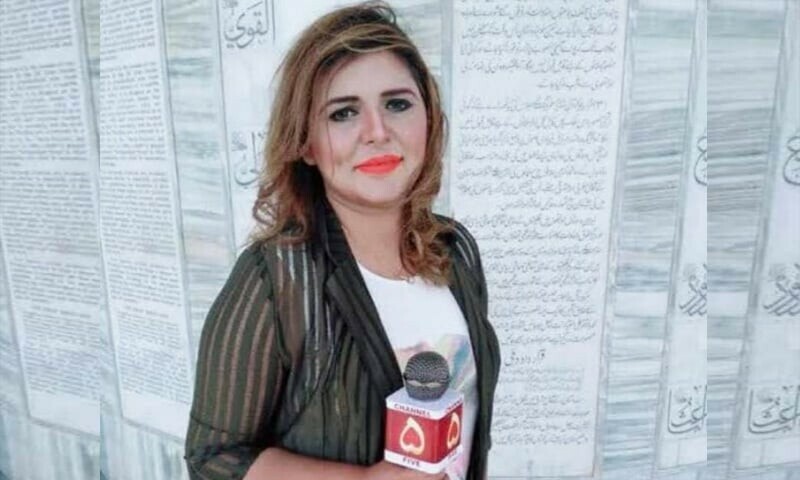 Sadaf Naeem, a reporter covering the PTI’s long march for Channel 5, was crushed to death during an accident near Sadhoke on Sunday.

According to Channel 5, the reporter was run over by PTI Chairman Imran Khan’s container. The media outlet said that Naeem fell from the container after which she was crushed by the vehicle.

A Dawn.com correspondent on the container, however, said that Naeem slipped while trying to climb the container.

PTI leader Fawad Chaudhry confirmed the development, saying that a female media personnel was killed and that Imran had himself gotten off the vehicle to inspect the incident while Rescue 1122 was alerted as well.

“We are not 100 per cent sure about the identity but the reports are very bad,” he said prior to the confirmation by the channel.

Fawad requested the public to take caution while walking along Imran’s container, adding that the lives of all people contributing to the march were “precious and respected”.

As a result of the incident, the PTI called off today’s activities in solidarity.

Soon after, Imran extended his condolences to the reporter’s family.

“I say this with utmost regret that due to an accident we are postponing the march today.

“We pray for the patience and strength of the woman’s family to deal with the tragedy,” he said in a brief address to supporters.

He said he had “no words to express my sorrow” at the terrible incident.

Prime Minister Shehbaz Sharif also expressed regret over the death, saying that he was “deeply saddened” by the incident.

Extending his condolences to her family, PM Shehbaz praised Naeem as a “dynamic and hardworking reporter”.

The prime minister announced Rs5 million financial aid for her family and ordered authorities to immediately complete the regulation process and hand over the amount to her family.

Information Minister Marriyum Aurangzeb said she spoke to Naeem’s husband, adding that her family would be helped in every possible way.

Foreign Minister Bilawal Bhutto Zardari too expressed his grief over the death and said it was the responsibility of any social or political event’s organisers to make arrangements to ensure the safety of the public and journalists.

“PTI organisation is fully responsible for the lives and property of the people and journalists involved in the long march.”

Punjab Chief Minister Pervez Elahi lauded the deceased and extended his condolences to her family.

Furthermore, the chief minister announced financial assistance worth Rs2.5 million for her family. “The Punjab government will take full care of the family,” he tweeted.

Journalist Mazhar Abbas called the accident a “tragedy” and appealed to Channel 5 to look after the reporter’s family as she died in the line of duty.

Other PTI leaders and members from the journalist fraternity also spoke highly of her and condoled her death.

Meanwhile, the Punjab police said that a police officer, posted in Muridke for the march, died due to a cardiac attack.

According to a statement issued by the Sheikhpura police spokesperson, Constable Liaquat Ali was on duty as a driver at the PTI march when he died due to a heart attack.

The statement added that Ali was the father of three sons and a daughter and belonged to Sheikhupura’s Khanqah Dogran area.

According to an incident report, he was shifted to the Sheikhupura District Headquarter Hospital but could not recover from the cardiac attack.

The report added that his body was sent to his ancestral village.