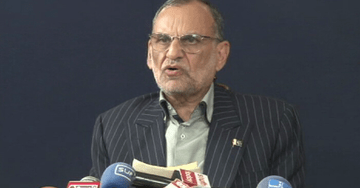 PTI leader Azam Swati on Friday held two military officials responsible for his custodial torture and called for them to be removed from their posts.

Swati, who was arrested earlier this month in a case registered against him over a controversial tweet thought to be against the armed forces, made the remarks at a press conference in Islamabad ahead of the PTI’s long march.

Since his arrest, Swati has alleged he was stripped and tortured. Last week, PTI Chairman Imran Khan decried Swati’s “custodial torture” in a press conference alongside him. The Senate Standing Committee on Human Rights also condemned it.

During his presser today, the PTI leader alleged “Major General Faisal” and “Sector Commander Fahim” were the “two culprits” behind his abuse and custodial torture. He did not reveal their full names in his presser.

He revealed the names with the “expectation” from the nation, courts, president and parliament members that a proper investigation would be conducted and the officials would be “removed from their positions.”

Swati referred to “a few individuals of the ISI (Inter-Services Intelligence)” as the “masters of the black and white of this country, as no institution is safe from the blackmailing of those people”.

He also demanded “the infamous ISI political wing be buried” as it was responsible for the country’s “insult and notoriety” rather than being the army’s flag carrier.

At the same time, the PTI leader acknowledged the professional expertise of the ISI and appreciated soldiers and generals, calling Pakistan “a living body whose soul is its people and the ISI.”

He insisted that he was “not insulting the brave army, but correcting them”, which was permissible under the Constitution.

During the press conference, he also showed the torture marks present on his hands “15 days after the incident”.

According to him, the speech for the conference was written by Swati himself as per the advice of his lawyers — something the politician revealed he almost never does.

He further said that he had presented his case to the Supreme Court a few days ago in the presence of his lawyers and the journalist community.

Sanaullah clarified that neither his ministry nor any court received any complaints which should have been registered if Swati’s allegations had any truth in them.

He insisted that the PTI senator was arrested by the FIA “lawfully, legally and after completing all formalities” and that he was treated respectfully and with dignity.

He also invited the additional director of FIA, Ayaz Khan, to present the “facts” behind the raid that was conducted to arrest Swati as Ayaz led the raid team.

Ayaz reiterated that the first information report (FIR) which was registered against Swati was for “a cognisable offence” after obtaining “proper search, seizure and arrest warrants”.

He clarified that as Swati was arrested outside his house and then taken to the police station, he was not arrested in front of his grandchildren.

He further said his team went to Swati’s house with the police — which included policewomen as well — and “properly introduced” themselves at the gate.

They had to wait for 45-50 minutes at his gate after which he was found “hidden lying on a mattress in a ditch near his house following an hour-long search”, the FIA official explained.