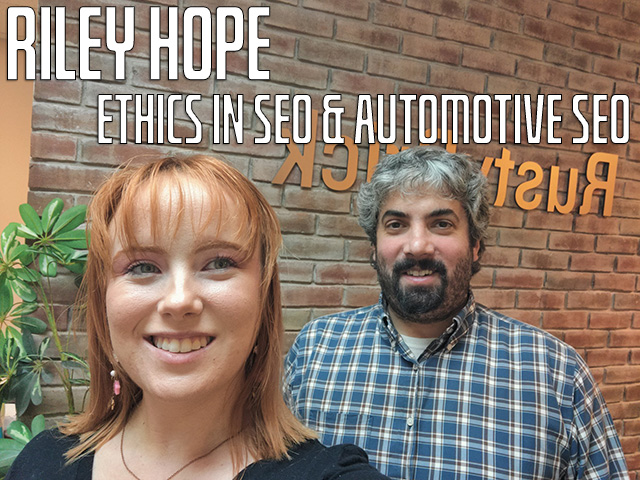 Riley Hope came to visit me at my office in October to talk SEO. Riley started in SEO by doing unpaid internships for non-profits after high school, this was during the “dark ages” of YouTube and Facebook she said. She reached out to a founder of company she found online she seemed to like and she got a real contract job. She learned SEO there and worked there for about two and a half years. Riley started her masters while a director at the agency she is at. It has been fun explaining how SEO works to her master advisors in university.

Riley explained the ethics behind SEO, she actually did her thesis on this topic. Some of it was about not deceiving or manipulating Google’s algorithm for personal or financial gain. The other part was not harming users/searchers, and also an aspect of collecting data on people around data collection – GDPR stuff.

Riley said she explained recently, like the past year or so, got into the SEO space on Twitter. She observed that some companies target small businesses with misinformation and then others in the space call them out. We spoke about some popular names in the industry a bit and then moved back into talking about her career including her work in the SEO auto space.

We then spoke about some of the challenges about doing SEO work in the automobile space and industry. She said working in the auto industry, specific with SEO, is like working in any other industry in the early 2000s and trying to get SEO things done, it is super hard.

We mentioned some names of SEOs in the auto space, such as Melissa Fach and Greg Gifford. Riley explained that SEOs in the auto SEO space is mostly male but in her agency it is more female.

You can subscribe to our YouTube channel by clicking here so you don’t miss the next vlog where I interviews. I do have a nice lineup of interviews scheduled with SEOs and SEMS, many of which you don’t want to miss – and I promise to continue to make these vlogs better over time. If you want to be interviewed, please fill out this form with your details.

Work smarter, not harder, to give customers what they want

How To Use Google’s Structured Data Markup Helper