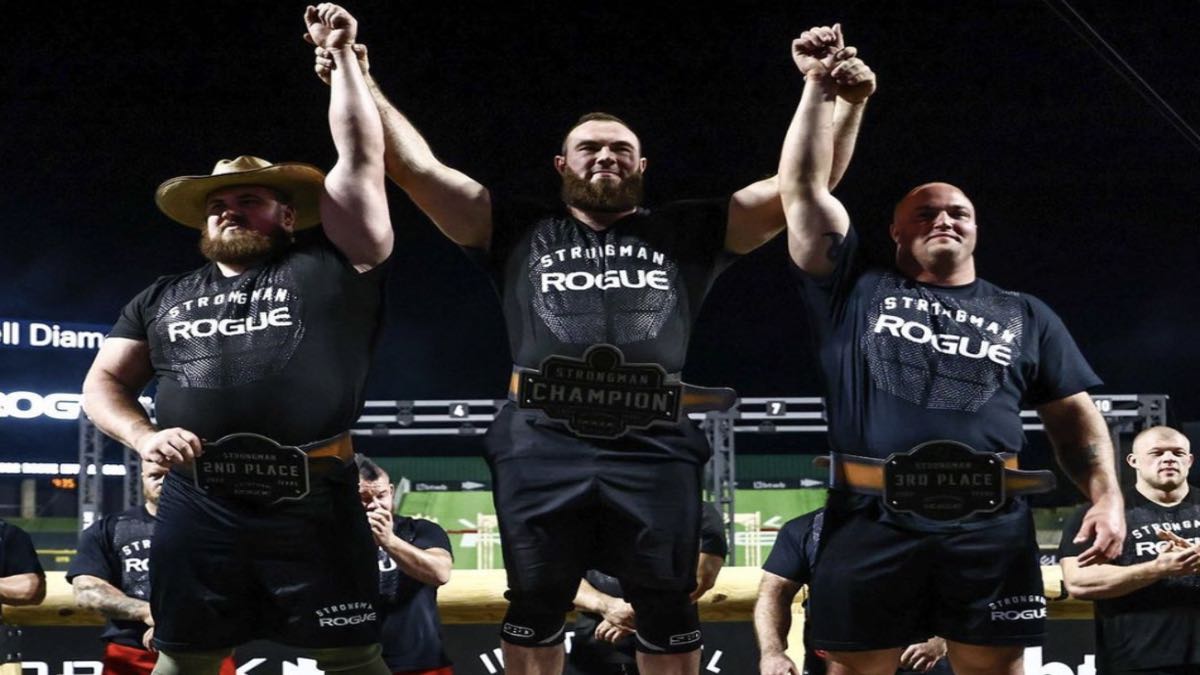 With incredible consistency, the Ukrainian strongman dynamo has yet another title under his belt.

Oleksii Novikov is the champion of the 2022 Strongman Rogue Invitational. This variation of the strength sports contest took place from Oct. 28-30, 2022, in Austin, TX. Novikov’s victory continues an impressive run where the athlete has finished on the podium in 17 of his last 19 contests dating back to September 2020. That same stellar run includes seven victories, perhaps most notably the 2020 World’s Strongest Man (WSM) title.

Trey Mitchell (second place) and Mitchell Hooper (third place) joined Novikov on the podium. Mitchell’s top-two performance is his immediate follow-up to a win at the 2022 Shaw Classic. Meanwhile, Hooper has yet another podium result in his young career after winning each of the recent 2022 Giants Live World Tour Finals and 2022 Arnold Strongman Classic UK competitions. To date, Hooper has failed to qualify for the top three on just one occasion — his debut at the 2022 WSM, where he came in eighth place overall.

Here are the final standings from the 2022 Strongman Rogue Invitational:

[Related: How to Do the Hip Thrust — Variations, Benefits, and Common Mistakes]

To win a major strongman contest, an athlete generally has to be a versatile Swiss Army Knife. Or, in this case, a Ukrainian Army Knife. Novikov won just one event at the 2022 Rogue Invitational, but thanks to an impeccable consistency built around strength and overall conditioning, he finished in the top three in all but one event. Such output is why he eventually stood on top of the podium in Austin, TX.

Here’s an overview of Novikov’s complete performance over six events that helped him capture his first Rogue Invitational title.

Novikov’s first Rogue title is the latest in a long line of achievements for the strongman superstar. Most might understandably point to his 2020 WSM title as the crowning moment of his career thus far, but the athlete is also a four-time Ukraine’s Strongest Man (2016-2019). He even won Europe’s Strongest Man for the first time in March 2022. Throw in a Hummer Tire Deadlift World Record from the 2022 Shaw Classic, and it’s been quite the competitive run lately for the Ukrainian athlete.

[Related: How to Do the Trap Bar Deadlift — Variations, Benefits, and Common Mistakes]

Novikov’s victory at the 2022 Rogue Invitational made for a lucrative prize. The win gave the athlete $114,125 in prize money, the most awarded of any strongman contest in the 2022 calendar year.

In a post on his Instagram, Novikov dedicated a “great end” to his competitive season to his countrypeople in Ukraine, who have been fighting off an invasion from the Russian army since February 2022.

“Like all the victories this year, this one is also dedicated to Ukraine and the Ukrainian people; I love you; you are unsurpassed,” Novikov wrote. “Thank you to everyone who put a hand in the fact that I can train in Ukraine, and as a Ukrainian, a bow to everyone who defends my country. We once again proved in the sports arena that we are the strongest.”

How To Do a Correct Squat