A data center or data center also called a server farm, is a facility used to house computer systems and associated components, such as telecommunications and storage systems.

The TIA-942: Standards Overview describes the requirements for the data center infrastructure. The simplest is a Tier 1 data center, which is basically a server room, following basic guidelines for the installation of computer systems.

The most stringent level is a Tier 4 data center, which is designed to host mission critical computer systems, with fully redundant subsystems and compartmentalized security zones controlled by biometric access controls methods.

Another consideration is the placement of the data center in a subterranean context, for data security as well as environmental considerations such as cooling requirements.

A data center can occupy one room of a building, one or more floors, or an entire building. Most of the equipment is often in the form of servers mounted in rack cabinets, which are usually placed in single rows forming corridors between them.

This allows people access to the front and rear of each cabinet. Servers differ greatly in size from 1U servers to large freestanding storage silos which occupy many tiles on the floor. Some equipment such as mainframe computers and storage devices are often as big as the racks themselves, and are placed alongside them.

Very large data centers may use shipping containers packed with 1,000 or more servers each; when repairs or upgrades are needed, whole containers are replaced (rather than repairing individual servers). Local building codes may govern the minimum ceiling heights. A bank of batteries in a large data center, used to provide power until diesel generators can start.

The physical environment of a data center is rigorously controlled:

Air conditioning is used to control the temperature and humidity in the data center. ASHRAE’s  (American Society of Heating, Refrigerating and Air Conditioning Engineers)“Thermal Guidelines for Data Processing Environments” recommends a temperature range of 20–25 °C (68–75 °F) and humidity range of 40–55% with a maximum dew point of as optimal for data center conditions.

The electrical power used heats the air in the data center. Unless the heat is removed, the ambient temperature will rise, resulting in electronic equipment malfunction. By controlling the air temperature, the server components at the board level are kept within the manufacturer’s specified temperature/humidity range. Air conditioning systems help control humidity by cooling the return space air below the dew point. Too much humidity, and water may begin to condense on internal components.

In case of a dry atmosphere, ancillary humidification systems may add water vapor if the humidity is too low, which can result in static electricity discharge problems which may damage components. Subterranean data centers may keep computer equipment cool while expending less energy than conventional designs.

Modern data centers try to use economizer cooling, where they use outside air to keep the data center cool. state now has a few data centers that cool all of the servers using outside air 11 months out of the year. They do not use chillers/air conditioners, which creates potential energy savings in the millions.

Backup power consists of one or more uninterruptible power supplies and/or diesel generators.

To prevent single points of failure, all elements of the electrical systems, including backup system, are typically fully duplicated, and critical servers are connected to both the “A-side” and “B-side” power feeds. This arrangement is often made to achieve N+1 Redundancy in the systems. Static switches are sometimes used to ensure instantaneous switchover from one supply to the other in the event of a power failure.

Data centers typically have raised flooring made up of () removable square tiles. The trend is towards 80–100 cm (31–39 in) void to cater for better and uniform air distribution. These provide a plenum for air to circulate below the floor, as part of the air conditioning system, as well as providing space for power cabling.

Data cabling is typically routed through overhead cable trays in modern data centers. But some are still recommending under raised floor cabling for security reasons and to consider the addition of cooling systems above the racks in case this enhancement is necessary.

Smaller/less expensive data centers without raised flooring may use anti-static tiles for a flooring surface. Computer cabinets are often organized into a hot aisle arrangement to maximize airflow efficiency.

Data centers feature fire protection systems, including passive and active design elements, as well as implementation of fire prevention programs in operations. Smoke detectors are usually installed to provide early warning of a developing fire by detecting particles generated by smoldering components prior to the development of flame.

This allows investigation, interruption of power, and manual fire suppression using hand held fire extinguishers before the fire grows to a large size. A fire sprinkler system is often provided to control a full scale fire if it develops.

Fire sprinklers require () of clearance (free of cable trays, etc.) below the sprinklers. Clean agent fire suppression gaseous systems are sometimes installed to suppress a fire earlier than the fire sprinkler system. Passive fire protection elements include the installation of fire walls around the data center, so a fire can be restricted to a portion of the facility for a limited time in the event of the failure of the active fire protection systems, or if they are not installed. 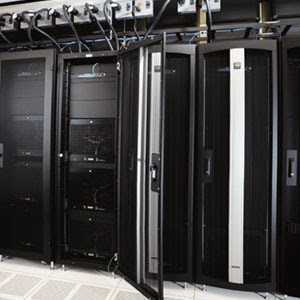 Physical security also plays a large role with data centers. Physical access to the site is usually restricted to selected personnel, with controls including bollards and mantraps. Video camera surveillance and permanent security guards are almost always present if the data center is large or contains sensitive information on any of the systems within. The use of finger print recognition man traps is starting to be commonplace.

Communications in data centers today are most often based on networks running the IP protocol suite. Data centers contain a set of routers and switches that transport traffic between the servers and to the outside world. Redundancy of the Internet connection is often provided by using two or more upstream service providers.

Some of the servers at the data center are used for running the basic Internet and intranet services needed by internal users in the organization, e.g., e-mail servers, proxy servers, and DNS servers.

Network security elements are also usually deployed: firewalls, VPN gateways, intrusion detection systems, etc. Also common are monitoring systems for the network and some of the applications. Additional off site monitoring systems are also typical, in case of a failure of communications inside the data center.

The main purpose of a data center is running the applications that handle the core business and operational data of the organization. Such systems may be proprietary and developed internally by the organization, or bought from enterprise software vendors. Such common applications are ERP and CRM systems.

A data center may be concerned with just operations architecture or it may provide other services as well.

Often these applications will be composed of multiple hosts, each running a single component. Common components of such applications are databases, file servers, application servers, middleware, and various others.

Data centers are also used for off site backups. Companies may subscribe to backup services provided by a data center. This is often used in conjunction with backup tapes. Backups can be taken of servers locally on to tapes.

however tapes stored on site pose a security threat and are also susceptible to fire and flooding. Larger companies may also send their backups off site for added security. This can be done by backing up to a data center. Encrypted backups can be sent over the Internet to another data center where they can be stored securely.

For disaster recovery, several large hardware vendors have developed mobile solutions that can be installed and made operational in very short time. Vendors such as Cisco Systems, Sun Microsystems,IBM and HP have developed systems that could be used for this purpose. 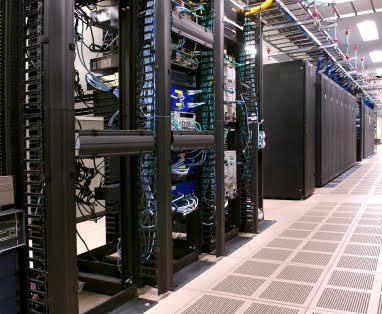 A server farm or server cluster, also called a data center, is a collection of computer servers usually maintained by an enterprise to accomplish server needs far beyond the capability of one machine. Server farms often have backup servers, which can take over the function of primary servers in the event of a primary server failure.

Server farms are typically co-located with the network switches and/or routers which enable communication between the different parts of the cluster and the users of the cluster.

A raised floor (also raised flooring) is a type of floor used in office buildings (such as IT data centers) with a high requirement for servicing to carry cables, wiring, electrical supply, and sometimes air conditioning or chilled water pipes. Additional structural support and lighting are often provided when a floor is raised enough for a person to crawl or even walk beneath.

This type of floor consists of a gridded metal framework or under structure of adjustable-height legs (called “pedestals”) that provide support for individual floor panels, which are usually 2×2 feet or 60×60cm in size. The height of the legs/pedestals is dictated by the volume of cables and other services provided beneath, but typically arranged for a clearance of at least six inches or 15cm.

A cable tray system, according to the US National Electrical Code, is “a unit or assembly of units or sections and associated fittings forming a rigid structural system used to securely fasten or support cables and raceways.” Cable trays are used to hold up and distribute cables.

In data center operations Hot Aisle refers to the arrangement of 19″ rack computer cabinets within the data center so that hot and cold air are separated into Hot and Cold aisles thereby improving cooling efficiency.

Gaseous fire suppression is a term to describe the use of inert gases and chemical agents to extinguish a fire. Also called Clean Agent Fire Suppression. These Agents are governed by the NFPA Standard for Clean Agent Fire Extinguishing Systems – NFPA 2001.

A man-trap in modern physical security protocols refers to a small space having two sets of interlocking doors such that the first set of doors must close before the second set opens. Identification may be required for each door, and possibly different measures for each door.

For example, a key may open the first door, but a personal identification number entered on a number pad opens the second. Other methods of opening doors include proximity cards or biometric devices such as fingerprint readers or iris recognition scans. “Man-traps” may be configured so that when an alarm is activated, all doors lock and trap the suspect between the doors in the “dead-space” or lock just one door to deny access to a secure space such as a data center or research lab.