Facebook has announced an update to its social issues ad policy that will essentially reduce the stringency of its social issues qualifiers, ensuring more ads can run without the ‘paid for by’ disclaimer notice.

As a recap, in the wake of the 2016 US Presidential Election, Facebook implemented a range of new restrictions and parameters around political and issues-based ads, in order to provide more transparency as to who’s funding and promoting pushes designed to influence public opinion.

A key element within this is the requirement that all advertisers who seek to run political or issue ads need to be verified.

“To get verified, advertisers will need to confirm their identity and location. Any advertiser who doesn’t pass will be prohibited from running political or issue ads. We will also label them and advertisers will have to show you who paid for them.”

That, essentially, has meant that any Facebook ad relating to any social issue requires both verification and a ‘paid for by’ disclaimer note, which users can tap on to learn more about the company or organization behind these campaigns. 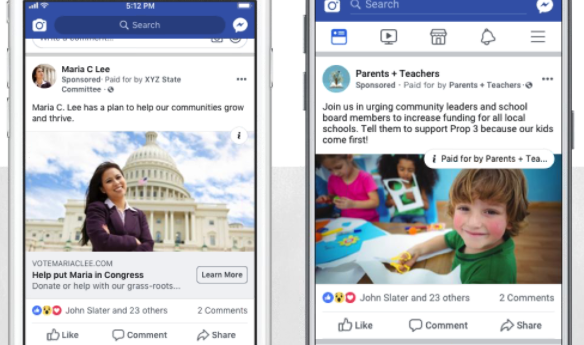 But now, Facebook’s looking to ease back on that slightly:

“Because the primary purpose of some of these ads is not to engage in advocacy, we’re changing the way we approach a subset of them. Advertisers will no longer be required to complete the authorization process or include a “Paid for by” disclaimer to run if we determine an ad includes the below three criteria:

So now, if an ad relates to a social issue, but is explicitly selling a product, as opposed to linking back to advocacy, it won’t come under the same regulation.

Facebook has provided a few examples to illustrate the change:

“No longer a social issue ad: “Our new show, “Our Only Future,” on how we can tackle climate change will premiere next month in your city. Purchase your early-bird tickets now for €10.”

Facebook says that because this ad promotes a product, and doesn’t advocate for a social issue specifically, this would no longer require authorization and the ‘paid for by’ disclaimer.

On the flip side, while this example does promote a product, it clearly states social issue advocacy messaging, so it would still require a disclaimer.

How that same process relates to, say, an image of a product that doesn’t include the specifics in the text, is probably harder to determine, but each ad is subject to review, and the basic push here is that brands can promote social issue related products and services, so long as the ad doesn’t specifically advocate for action or support, as such. If it does, then they can, of course, still run the ad, but they’ll need to go through the authorization process.

But even then, it seems a little confusing. Based on my reading of the three regulations noted above, this last example should actually not be classified as an issues ad, as it is focused on a product as its primary promotional CTA.

It seems likely that there will be some confusion, but the gist is that Facebook – or Meta – wants to make it easier for more brands to run more ads by reducing the onus on them to go through the more stringent steps to promote products that are tangentially related to social issues.

Honestly, it looks fairly spotty, and fairly open to misuse, but the Facebook ads team will take on responsibility for enforcement, which should hopefully limit any potential gray areas or misuse.

Though I wouldn’t bet on it. If, for example, I sell t-shirts that say ‘climate change is a hoax’, but I don’t include that in the caption text, and the ad is for a product, would that be able to slip through the newly formed cracks in this policy? And let’s say I’m working for the oil and gas lobby – wouldn’t that be an important disclaimer for transparency?

Either way, the policy has been updated, which will add new considerations for impacted advertisers and organizations.