You know those futuristic translator devices that they have in sci-fi movies, which enables characters from entirely different universes to converse, in real time, without the need for any prior knowledge of the local tongue?

That could soon be a reality, with Facebook’s AI research team today unveiling their latest work on an improved language translation system, which, right now, can translate up to 128 different languages into English within a single application.

Called XLS-R, the process is able to perform speech recognition, speech translation, and language identification at a higher rate than any similar systems available.

“Trained on more than 436,000 hours of publicly available speech recordings, XLS-R is based on wav2vec 2.0, our approach to self-supervised learning of speech representations. Utilizing speech data from different sources, ranging from parliamentary proceedings to audio books, we’ve expanded to 128 different languages, covering nearly two and a half times more languages than its predecessor.”

Indeed, Facebook says that it’s tested XLS-R against four major multilingual speech recognition benchmarks, in which it outperformed their results on most of the languages tested. 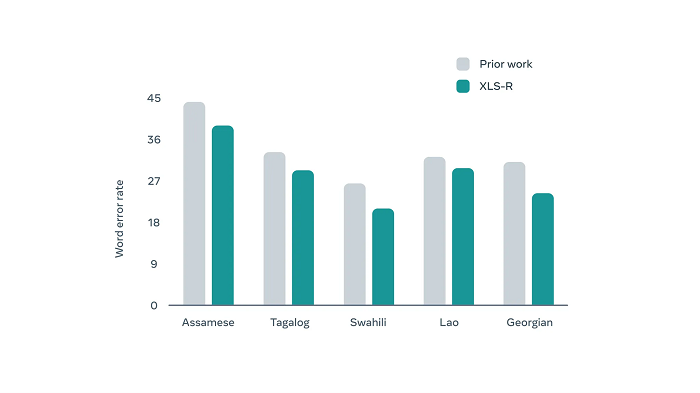 As you can see here, the error rates for these systems are still relatively high for some languages, but the XLS-R shows a marked improvement in accuracy, which Facebook is still improving as it develops the process.

That could eventually open up a range of new applications, including cross-border connection, and commerce, expanding opportunities for businesses across the globe.

Facebook also notes that such systems could be of significant value in its future metaverse applications, facilitating more universal connection in these digital, open world communities.

As noted, Facebook is still developing the system, and Facebook also notes that there are more than 7,000 languages spoken in the world, so it’s a long way off a truly universal translator. But it’s another step towards that next stage, and towards making Facebook a more critical utility in connection.

You can read more about Facebook’s XLS-R research here.

Kim Kardashian Fined $1.25 Million For Promoting Crypto On Social Media – Could Other Celebrities Be Charged?